Jewish residents settled in Kuliai, a town in the district of Plungė, during the 18th century. Even though they had built a small synagogue in the town, Jewish children would attend a Lithuanian school, learning Hebrew after class. Most books needed for their studies were borrowed from the Jewish community library in Plungė. Nearly all Jewish families earned their living from trade.

According to the interwar period census, out of 556 people living in Kuliai, 142 were Jewish. When Nazi Germany occupied the territory in June 1941, Jews were imprisoned in the large Brukas’ house and kept there without any food or water. On June 29, Jewish residents of Kuliai were taken out of prison under false pretences. Thinking they were going to help put out a fire in Plungė, they were brought to a forest near Kuliai and shot.

Based on the remains found near the forest, it is estimated that 82 Jewish residents of Kuliai were executed. 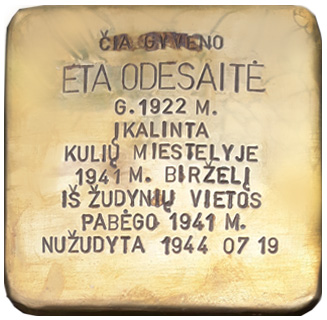