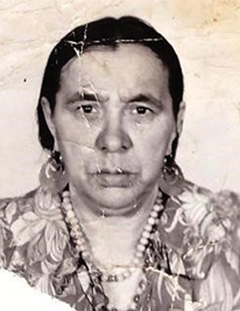 Ona Grachauskienė-Bagdonavičiūtė was taken to a number of forced labour camps, together with her parents, her sister Vanda and her two brothers. Her sister, her brothers and the family of one of her brothers all perished there.

Ona Grachauskienė-Bagdonavičiūtė was the only one to survive. Ona’s son, Špako, was also interned in one of the camps. According to a number of accounts, he was taken into a barn together with other young children and burnt alive.

While in the concentration camp, Ona attended to the injured and did housework for a German family. On her return from Germany, she settled in Panevėžys. After the war, she and her husband brought up seventeen children.