It is estimated that the Krakės Jewish community started forming in the 18th century. Between the Wars, the town’s Jewish community was populous (around 600 people) and comprised almost a half of the whole population. In 1930, 156 Jewish families lived in Krakės. The community was active, especially in crafts and trade. In Krakės, Jews ran around 60 various shops and workshops, a synagogue, a school with around 80 students, a credit union, and a choir.

After the German occupation in June 1941, a Jewish ghetto was established in central Krakės, to which Jews were driven from Krakės, Grinkiškis, Dotnuva, Baisiogala, and other local villages. In total, 452 people would reside in the ghetto.

On September 2, 1941, a mass murder was commited in the Peštiniukai village near Krakės: 1125 Jews from Krakės and its surroundings were shot to death.

The Stolpersteine in Krakės are dedicated to the famous members of the Jewish community who lived and worked here, including famous doctors B. Alperavičius and A. M. Volfovičius, and pharmacist A. Polunskis. They were prominent not only among local Jews, but also all around the town and its outskirts, as these medical professionals would be sought out by people from all over the county. 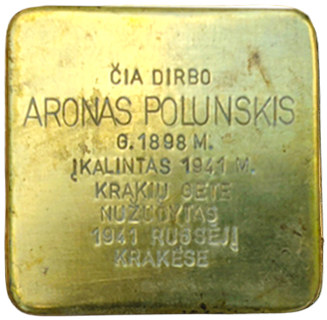 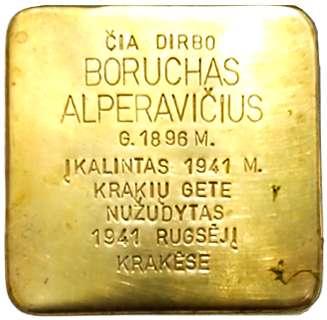 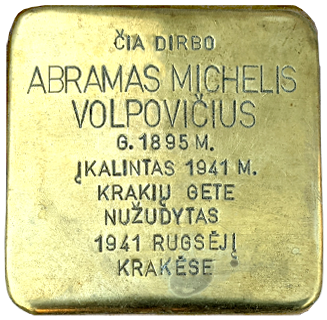