It is presumed that Jewish residents settled in Plungė in the 17th century. In 1923, they made up 44% of the city’s population.

When Nazis reached Plungė in July 1941, its large and active Jewish community was obliterated.

Before the war, the Jewish residents of Plungė enjoyed cultural autonomy- they had opened synagogues, schools and were printing books in their own language. Now, they had to fight for survival. Approximately 10 mass murder sites exist in the region of Plungė, with a small forest near the village of Kaušėnai being the largest massacre site in the area, where 1800 Jews were killed and buried. These victims had first been detained inside the Plungė synagogue, subjected to starvation and unsanitary conditions for 2 weeks. They were later forced to walk roughly 5 kilometres to the site of their execution.

In 2011, during the 70th anniversary of the massacre in Kaušėnai, a Memorial Wall was built using 1800 bricks from the demolished synagogue in Plungė, each brick symbolizing a victim. 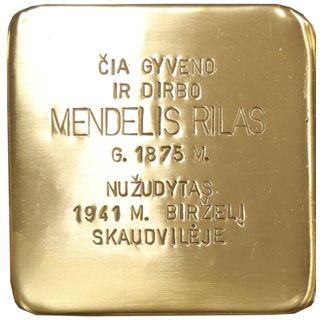