It is thought that Jews in the territory of Vilkaviškis settled in the 16th century when queen Bona Sforza assigned some forest to construct a synagogue.

There was a significant increase and prosperity in the Jewish community in the 19th century. Before the Holocaust, in 1939, 3609 Jews lived in the city and its suburbs, making up 45 percent of the city’s population.

The majority of Jews engaged in trade and crafts; a small part worked in agriculture and gardening. The Jewish community of Vilkaviškis lived an active social, cultural, and economic life. Several Jewish educational institutions operated there: an elementary Hebrew school, a vocational school, and a special Hebrew high school, which now is the administration of the municipality of Vilkaviskis district.

The government of Nazi Germany occupied Vilkaviškis on 22nd June 1941. The systemic annihilation of Jews of Vilkaviškis started on 28th July 1941. Approximately 900 men were killed. For the remnant of the Jews, mostly women and children, a ghetto was made in local barracks near the mass grave of shoot-down men. The Jews of the Ghetto were killed the next day after the Rosh Hashannah on 24th September 1941.

From July- September months 3400 Jews who lived in Vilkaviškis were killed.

Stumbling stones in Vilkaviškis are installed in Maironis street 21 for the Kleinšteinai family. Elena Savickienė initiated the installation. 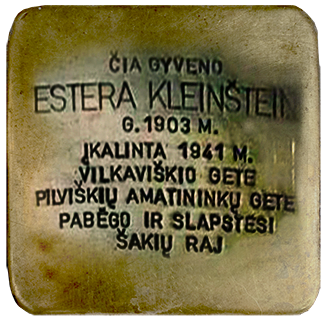 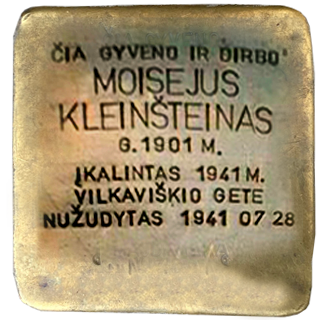 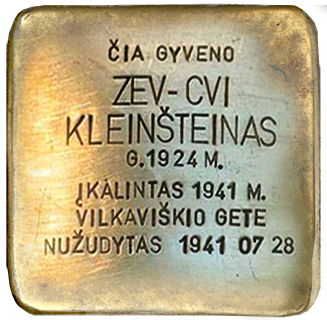 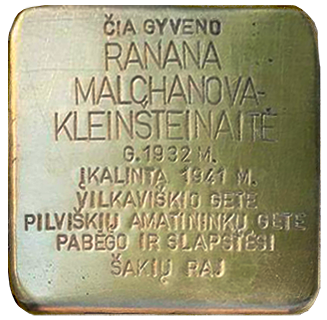